At the beginning of August, the Korean phone manufacturer launched its latest Foldable devices containing ultra-high Samsung price tags. Out of these latest foldable, Galaxy Z Fold 3 is the top of the line which can also be converted into a tablet but is a bit unpractical for carrying around in the pocket due to its humongous size. So our bet in turn is the Galaxy Z Flip 3, reminiscent of the clamshell phones from the past. The mobile phone can be opened from being as small as the size of a makeup mirror to a full-fledged Android phone. It is much cheaper than its predecessor released last year, and in our opinion, it is one of the coolest phones ever to come out of Samsung’s workshop. 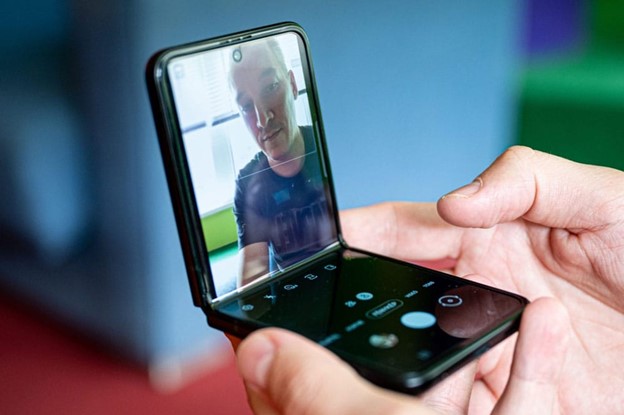 Although there is a three in the name of the Galaxy Z Flip 3, don’t let this fool anyone: the device is only the second in the line, but the manufacturer decided that the numbering should match the third-generation Z Fold and skipped the number two with noble simplicity.

The new model follows its predecessor in terms of its design, with the biggest difference being the external display on the cover. The size of the cover display has now grown from 1.1 inches to 1.9 inches, thanks to which it is not only able to display more information but the display can also be customized. One of the most attractive features of the Flip 3 is that it is only 72.2 x 86.4 x 17.1 millimeters when folded, barely bigger than a makeup mirror, so it can even fit in a shirt pocket. Of course, its thickness is almost twice that of an average mobile phone, but you’ll still love that it could fit in a very small space and doesn’t slip out of your pocket due to its large size. 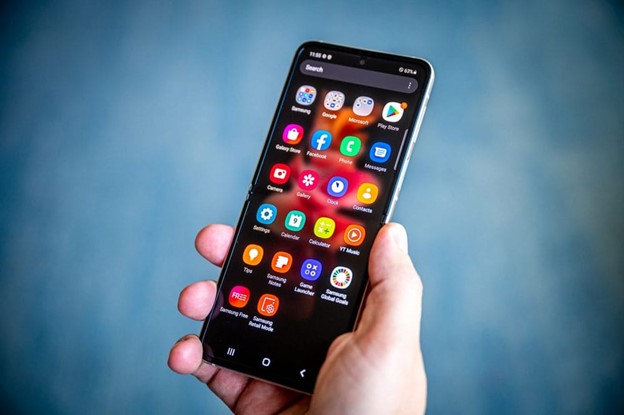 The aluminum-framed phone is covered with matte glass on the outside and is particularly elegant when folded. Although the overall picture is somewhat impaired by the fact that, like the Z Fold 3, Samsung could not even manage to make the bottom and top parts fold flat on top of each other. There is still a gap in the middle through which the internal display can easily get dusty. Aldo due to the display bend in the middle, the buttons on the right side are placed too high: in the case of the power button, this is not so bad, but reaching the volume control with one hand when it is open is often an inconvenient task. 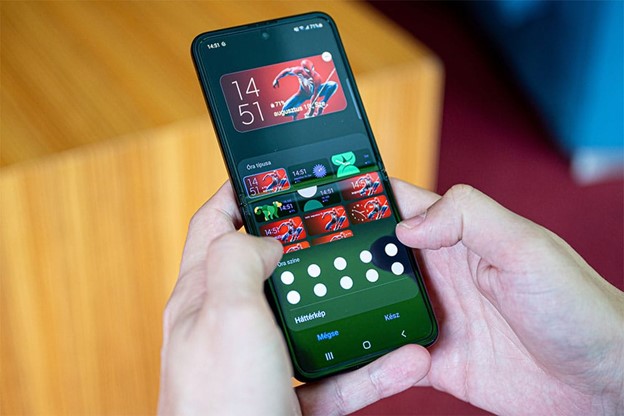 A positive change is that this phone has already been IPX8 protected so we don’t have to worry about it in the rain and it can even easily survive a drop in the bathtub for a few moments. However, like the Z Fold 3, we don’t get dust protection here either, so it’s not worth pushing the phone into the sand on the beach.

When opened, the end result is a phone measuring 72.2 x 166.0 x 6.9 millimeters with a 6.7-inch AMOLED display which, unlike its predecessor, supports a refresh rate of 120 Hz. In the middle of the screen, you can also see/feel the inevitable “moat” due to the bending. But regardless of the folding crease, we get an excellent display, whether it’s about colors, contrast, or even brightness. One thing you have to be prepared for is that the Z Flip 3 is not your average mobile when opened, and the aspect ratio is 22:9 from the start. We can’t talk about a one-handed device, and based on our experience, it’s not even worth using this phone that way, especially if you want to avoid it flying out of your hand every now and then. 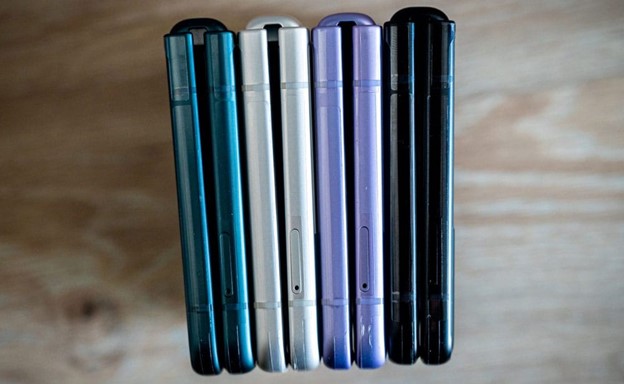 Another important detail is that, like last year, you can’t have fun with this phone as you did with snap-on mobile phones 15-20 years ago. The cover can’t be opened with a single loose movement, you have to stick your finger in the middle, and you can’t poke the upper part either, since the hinge keeps the wings stable. The latter solution has its advantages (we’ll get to that later), but regardless, those who expect to unlock their phone with one-handed gestures will be disappointed.

In the open state, we get a full-fledged smartphone.

Returning to the external display: you still cannot traditionally operate the phone, but always on display is available, so the time, date, and remaining battery are always clearly visible, and notifications can be read by swiping from left to right. And that’s not all, widgets can also be displayed here: music player, weather, daily programs, alarms, you can start a timer, and even the voice recorder can be started from the small secondary display. It is also a small bonus that, like other phones, you can create a unique background image for this interface, and thanks to quite a few types of clocks, you can put together quite imaginative solutions. It is also interesting that the cameras are activated by pressing the power button twice, so you can take a selfie (or even a video) without opening the phone, although we did not see much use for this option.

The Showstopper is small but strong

As for the hardware inside the phone, we get a Snapdragon 888 processor, accompanied by an Adreno 660 graphics chip, 8 GB of LPDDR5 RAM, and 128 or 256 GB of UFS 3.1 storage (expansion, however, is not possible). This is a pretty powerful configuration, it supports Android 11 to a large extent, you don’t have to worry about performance for years, and games don’t crash on the phone either. In addition, 5G, WiFi 6E, Bluetooth 5.1, and NFC are available, but only one SIM card can fit in the dedicated tray. The latter is not such a big deal in addition to the ever-growing eSIM services, but at the same time, the overall picture is overshadowed by the fact that only a 3300mAh battery was installed in the phone. 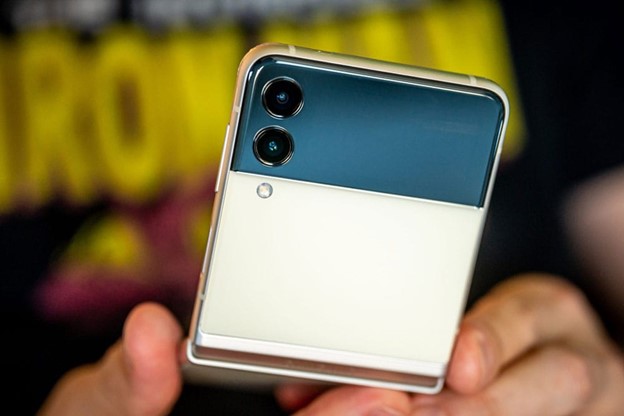 With the adaptive image update capable of 120 Hz and the external always-on-display function turned on, this battery can last a maximum of one day, meaning that it has to be charged in the evening. The situation is made worse by the fact that the maximum wired charging is just 15 watts while the phone can only charge 10 watts wirelessly, in real-time. With the former, it took almost an hour and a half to reach 100 percent from zero, which in 2021 was quite a woeful performance for a smartphone costing several hundred thousand – moreover, by new trends, neither earphones nor charging heads are found in the box.

There is also a reason to worry about the cameras: the 10-megapixel module inside does not offer anything extra, but it can be used to shoot decent selfies. A 12-megapixel main camera on the back is accompanied by a 12-megapixel ultra-wide unit. This is a rather modest range for a top-of-the-line Samsung phone. Even though the main camera can take great pictures both during the day and at night but it doesn’t make much sense to take out the wide-angle unit after sunset, because the result is noisy and there are plenty of problems with detail. Even a midrange has better sensors with quality results, for example, the Samsung Galaxy A32 price ranges anywhere from PKR 45,000 to Rs. 50,000 but has far better cameras than Fold 3 costing more than Rs. 3,00,000. 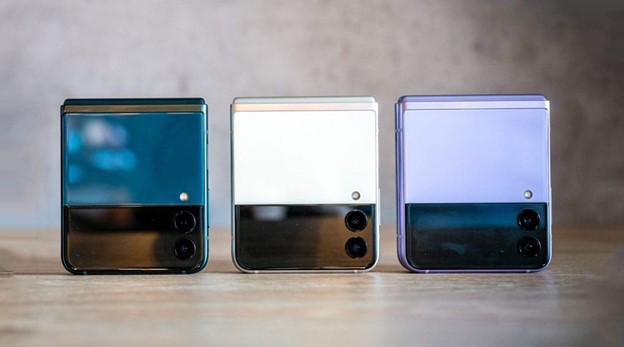 A telephoto camera is sorely missing from the above set-up, but at the same time, the Z Flip 3 also has the advantage of being able to take close-up photos and videos when placed on a horizontal surface. Thanks to this design, you can record a moving image of yourself almost anywhere without having to hold the device. Of course, this will be an advantage, especially for those who regularly like to post edited or live videos on social media.

Not perfect, but very cool

The cheapest 128 GB variant of Galaxy Z Flip 3 can be taken home for PKR 314,999, which is quite high, but it should also not be forgotten latest iPhone 14 retails even higher compared to the Samsung price in Pakistan. Objectively speaking, for such money, the tiny battery is quite painful, and the lack of a normal charging speed, as well as the two “rear cameras” seem to be insufficient, but these shortcomings can easily be overwritten by subjective aspects. Samsung’s modern clamshell phone is a very cool gadget, one of the most exciting devices on the current market.

Small, and elegant, the bendable display still has the power of surprise, and the above complaints can be offset by the fact that we get a great display and particularly strong hardware enclosed in the special device case. 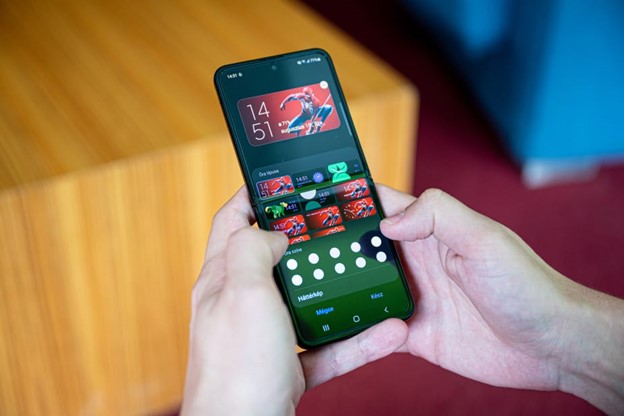 The Galaxy Z Flip 3 can be an ideal choice for those who are tired of the usual flip-flop phones, want something unique, and are willing to make some compromises in return. And for our part, we would not be at all surprised if this device were Samsung’s first truly resounding success among its phones with a bendable display.

It’s hard to find a cooler phone than this.