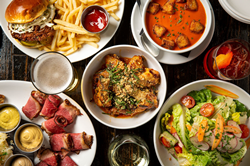 The second annual Taste of Fulton Market has been announced for September 29th from 5 pm to 10 pm in honor of the long culinary history of the neighborhood.

This year’s foodie celebration is expanding in terms of size and scope, now taking over all three levels of the historic Morgan’s on Fulton special events building with even more of the area’s most renowned restaurants and bars, including venues like Rose Mary, Swift & Sons, Carnivale,

For a second year in a row, the ultimate showcase of the Fulton Market Dining District will benefit the Illinois Restaurant Association Educational Foundation Restaurant Employee Relief Fund as well as a new charity partner, Recipe for Change, an organization that provides culinary instruction and job skills training to detainees at Cook County Jail.

“As it was in year one, our purpose for this event is to raise money for the workers on whose backs this industry is built.

And to bring together restaurants from the hottest dining neighborhood in the country for a day of culinary celebration and gratitude,” said Morgan’s owner James Geier.

Whereas last year’s Taste of Fulton Market was set exclusively in the retractable glass rooftop enclosure at Morgan’s, this year event will take over all three levels of the building, adding thousands of square feet for more vendors and live entertainment from local artists.

With panoramic views of Fulton Market and the Chicago skyline as the backdrop, local big-name chefs will amass for cooking demos and to mingle with fans.

Guests of this year’s culinary celebration will receive a greeting cocktail with a historical motif along with samples from participating restaurants.

Admission tickets are also inclusive of beer and wine and a map of Fulton Market highlighting participating venues that they can use to redeem food items.

A raffle with prizes ranging from restaurant experiences and swag to local art and artifacts will support the partnering non-profit beneficiaries.

More About the Host Venue:

Since 1921, the invigorating corner of Morgan and Fulton has held a local friendly establishment where all have been welcome.

Today, in the building’s 100th year of continuous culinary operations, Morgan’s on Fulton and sister venue Marvin’s Food & Fuel have kept the tradition alive, giving Chicago a world-class catering and private events venue and a vibey neighborhood restaurant and bar under the same roof.

Owner James Geier has always been a believer in the booming Fulton Market District, as reflected in his investment here over a decade ago.

Both venues all-inclusive vision took shape to fill a void Geier felt was missing in the community.