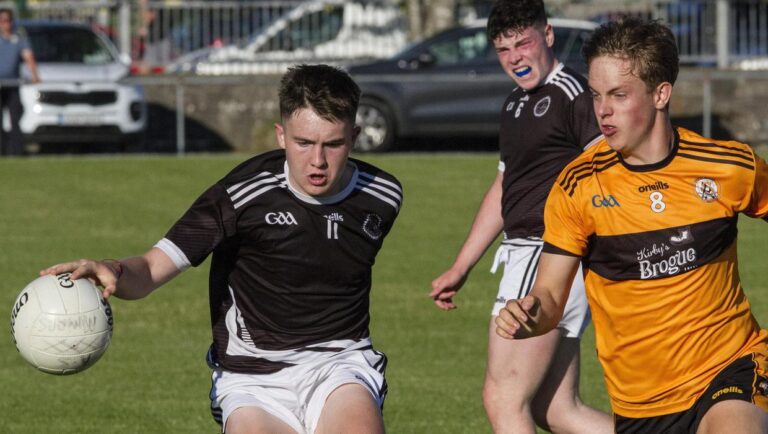 The last club standing may have bowed out at the hands of the biggest division in the competition. But they bowed out with far more of a roar than a whimper Austin Stacks Semi-Final With Kenmare District.

North Kerry looked very strong and controlled here and had star showings from the likes of David Mulvihill. Evan Boyle, Cormac Dillon, and Oisín Healy, but they were forced to dig very deep to see off a young Stacks’ side (they had three under-15s starting) with the likes of Ben Murphy, Daniel Kirby, and Paddy Lane leading the way.

It was Lane who opened the scoring with a beauty.

But Jamie Moloney replied in kind. In truth both sides were struggling to make headway, with both defences on top. Jack Eright opted for a point when a superb Cormac Dillon pass almost set him up for a goal. But the effervescent Lane quickly cancelled that out. Dillon won and converted a free and Oisín Healy finished off a great team move to make it 0-4 to 0-2. Daniel Kirby trimmed the gap but Dillon replied with a beauty. Despite chances, neither side scored again before the break, although Darragh O’Keeffe almost got a North Kerry goal with an audacious lob, but keeper Michael Tansley was alert to the danger. The half-time score was North Kerry 0-5 Austin Stacks 0-3.

Daniel Kirby opened the second half with a super point

Oisín Healy’s converted mark was equally impressive. Kirby once again brought Stacks within touching distance, 0-6 to 0-5. Ronan Carroll had a goal chance. But it was quickly swallowed up by the North Kerry defence – Austin Stacks had plenty of play, but were maybe a touch over-elaborate in going for the jugular. Cormac Dillon and Evan Boyle put daylight between the teams. And there were four points between them after Jamie Moloney was fouled, with Cormac Dillon firing over. Ben Murphy fisted over and Paddy Lane picked out Ryan O’Driscoll to trim the gap. But Evan Boyle replied with a long range beauty. Stacks wouldn’t give up, though, with Ben Murphy fisting over a great team move. And Daniel Kirby adding another from range. Just one point between them again, 0-10 to 0-9.

Ronan Carroll’s slaloming run almost got in on the North Kerry goal, but Conor Sweeney deftly robbed him at the last second. Paddy Lane again closed the gap to the minimum with a free. You could cut the tension with a knife by now!

Austin Stacks did find the net with a hand-pass, but that hasn’t been legal for fifty years – Ronan Carroll had been trying to fist over. However, Paddy Lane finished off a great move to level matters with time almost up. With the game in the melting pot, Evan Boyle swung over another long range monster point, and that proved to be the winner. Stacks still pressed relentlessly as Eddie Healy departed on a black card. The last ball fell to Paddy Lane, but the referee deemed it a free out and Stacks’ last chance was gone. They could leave with their heads high, though, and an impressive North Kerry will know that they have passed a big hurdle as they advance to meet Kenmare District in the semi-final.

An Tóchar Drive Semi-Finals As Blessington