10 of the Best TV Shows to Watch on Apple TV+ 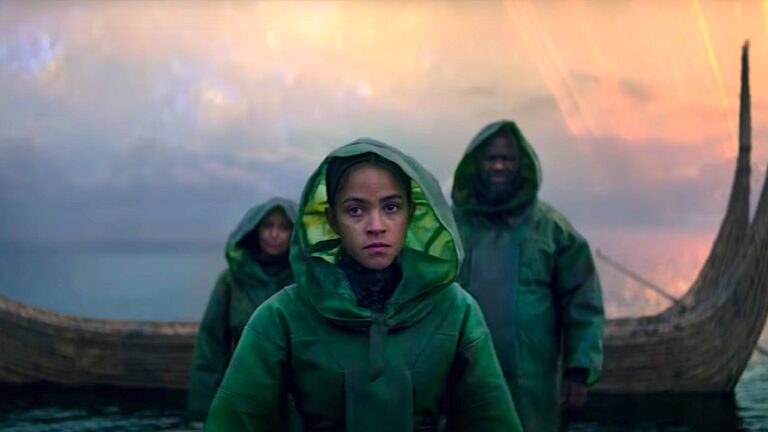 Curious but don’t know where to get started? Below are our picks for the best shows on the service. When you’re done, head over to our guides to the best Netflix shows, Amazon Prime series, and Disney+ shows, because you can never have too much telly.

Hillary Rodham and Chelsea Clinton going on the road to “celebrate the gutsy women who inspire them” might sound a little pat, but what this eight-part docuseries lacks in subtlety it makes up for in great moments with some of the world’s bravest and brightest. Come for Megan Thee Stallion and Jane Goodall, stay for academic Kimberlé Crenshaw and GLITS founder Ceyenne Doroshow. It might be heavy on the platitudes, but it’s also full of wisdom and heart.

Claire Danes doing her best trembling-chin acting in period garb; Tom Hiddleston as a town vicar; rumors about a mysterious mythological serpent—is there anything not to love about this show? No, there’s not. The Essex Serpent, based on the novel by Sarah Perry, follows a recent widow (Danes) as she heads to the countryside in Essex to investigate a “sea dragon.” There, she meets a vicar, Will, who is far more skeptical of the serpent’s existence. Lush and inviting, it’s the ideal period mystery.

Out of all the shows on this list, Severance may be the one that firmly established Apple TV+ as a streaming player with edgy prestige content. Adam Scott plays Mark, a man distraught by the death of his wife who opts to undergo Severance, a procedure that divides his memories of work from those of his life at home. He’s quite happy with the setup until a former Lumon Industries coworker tracks him down when he’s out-of-office, setting off a series of events that makes him question not only Severance but the work his company does. From there, it only gets more weird and bleak with each passing minute. Tense and heartbreaking, this show, the bulk of which was directed by Ben Stiller, will keep you guessing, and questioning, the whole way through.

An all-too-rare example of a video game TV show that really works, Mythic Quest is one of the best new workplace comedies of the last few years. Presented in perfectly bingeable half-hour episodes, the show follows a fictional game studio known for its *World of Warcraft–*like MMO, Mythic Quest, as the people who make it slalom through their many quirky relationships. The writing is excellent, consistently funny and emotionally impactful when you least expect it, and the show manages to confront real issues in the industry without sacrificing laughs.

We called Foundation a “flawed masterpiece” in our review, which is still high praise considering the complexities of adapting a sprawling sci-fi classic for TV. Based on Isaac Asimov’s book series of the same name, the dizzyingly ambitious Foundation stars Jared Harris as Hari Seldon, a math professor who, along with his loyal followers, is exiled for predicting the oncoming end of the galactic empire that rules over them. It looks incredible, and while the show can suffer under the weight of its enormous scope, this Game-of-Thrones-in-space wannabe is still one to check out.

Every streaming service needs a flashy mainstream drama with Hollywood heavyweights to pull in viewers. Apple TV+ has The Morning Show. Stars Jennifer Aniston, Reese Witherpoon, and Steve Carell are all in top form as members of the onscreen team that makes up The Morning Show, a popular breakfast news program. The Morning Show doesn’t waste any time getting going, straight away showing you co-anchor Mitch Kessler (Carell) being dismissed amid accusations of sexual misconduct. From then on, the show explores the ramifications of a #MeToo scandal, and while it doesn’t always work, it’s often thrilling viewing, and you can’t accuse anyone involved of not giving their all to the weighty subject matter.

Released when Donald Trump was still president of the United States, Little America was and remains a timely reminder of what actually makes America great. Each episode of this anthology series focuses on a different story of immigrants living in America. From an undocumented high school student who discovers a talent for squash to a Ugandan baker determined to make a success of her business, every one of these 30-minute vignettes—all of them based on real people—is inspiring and important viewing.

On paper, Ted Lasso sounds terrible. The inconceivable story of an American football coach who has never watched a game of soccer somehow landing himself a job as coach of the (fictional) Premier League club AFC Richmond and trying to make up for his total lack of qualifications by being a nice guy. Sounds unwatchable, doesn’t it? And yet Ted Lasso has captured the hearts and minds of viewers on both sides of the pond with its large-as-life cast and irresistibly wholesome messaging, hoovering up awards for fun in the process. And if none of that has sold you, just trust us when we say that it’s worth watching for Nick Mohammed’s performance alone.

Hailee Steinfeld is a riotous young Emily Dickinson in this half-hour show from creator Alena Smith. It was part of the original Apple TV+ lineup and quickly distinguished itself thanks to its off-kilter vision of 19th century Amherst, Massachusetts. The first season is a set of sharp, surreal vignettes, inspired by Dickinson’s work and tracing the imagined life of the young poet, who is rebelling against her father, the town’s societal rules, and just about everything else. If you’re a Dickinson stan, love a bit of smart queer dramedy, or just have a penchant for a modern soundtrack in a Civil War–era show, you’ll dig this.

A solid slice of alternate history, For All Mankind starts with a very smart premise: What if the US was edged out in putting a man on the moon? How would the space-race rivalry between the Americans and the Soviets have played out? It’s mostly a slick, stylish, NASA-heavy period drama, but, as this is from the brain of Ronald D. Moore, there are a few standout moments and episodes with attention shared around the large ensemble cast.