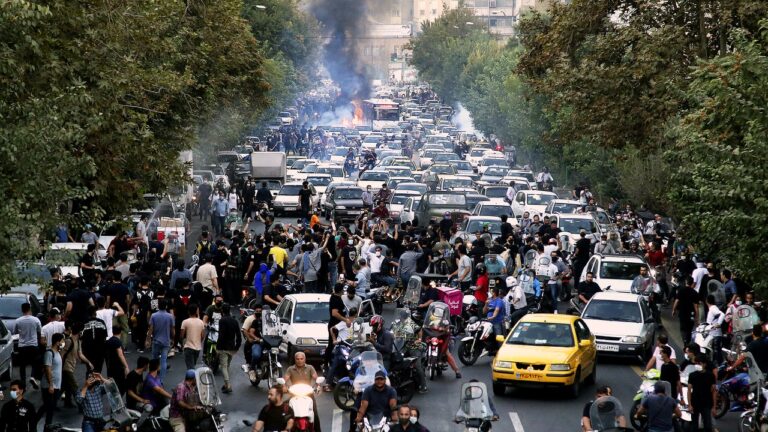 Iran started shutting the internet down on September 19 as protests around Amini’s death gained momentum. Since then, multiple internet-monitoring organizations, including Kentik, Netblocks, Cloudflare, and the Open Observatory of Network Interference, have documented the disruptions. Mobile network operators, including the country’s biggest providers—Irancell, Rightel, and MCI—have faced rolling blackouts, the groups say. Multiple mobile providers have lost connectivity for around 12 hours at a time, with Netblocks saying it has seen a “curfew-style pattern of disruptions.” Felicia Anthonio, who leads NGO Access Now’s fight against internet shutdowns, says the group’s partners have reported that text messages containing Amini’s name have been blocked. “If you’re sending a message containing that name, it doesn’t go through,” Anthonio says.

The clampdown against Instagram and WhatsApp started on September 21. While shutting down mobile connections is hugely disruptive, blocking access to WhatsApp and Instagram cuts off some of the only remaining social media services in Iran. Facebook, Twitter, and YouTube have been banned for years. State-backed Iranian media said it was unclear how long the blocks on Instagram and WhatsApp would last but that they had been imposed for “national security” reasons. “It does seem they are targeting these platforms that are the lifeline for information and communication that’s keeping the protests alive,” says Mahsa Alimardani, an academic at the Oxford Internet Institute who has extensively studied Iran’s internet shutdowns and controls.

The 1500tasvir team member says the account, which is run by a group of around 10 core people both inside and outside of Iran, is posting videos to document the protests. People on the ground send the videos—in some areas, patchy connections are available and fixed Wi-Fi connections still work​​—and the group checks the content before posting it online. The group says it is receiving more than 1,000 videos per day, and its Instagram account has more than 450,000 followers.

Internet shutdowns can have a “huge” impact on protests, the 1500tasvir team member says, because when people around Iran can’t see that others are protesting, they may be likely to stop themselves. “When you … see other people feel the same way, you get more brave. You are more enthusiastic to do something about it,” they say. “When the internet is cut off … you feel alone.”

The blocks against WhatsApp also appear to have impacted people outside of Iran. People using Iranian +98 telephone numbers have complained that WhatsApp has been slow to work or not functioning at all. WhatsApp has denied it is doing anything to block Iranian phone numbers. However, the Meta-owned company has refused to provide any more information on why +98 numbers outside of Iran have faced problems. “There’s something strange going on, and it’s likely to do with the way Iran is implementing censorship on these different platforms because it does seem a bit more targeted,” Alimardani says.

Share. Facebook Twitter Pinterest LinkedIn Tumblr Email
Previous ArticleHilary Mantel was one of the great voices of historical fiction – and so much more
Next Article The 5th Annual Causeway 5K is coming to Manahawkin — Causeway CARes