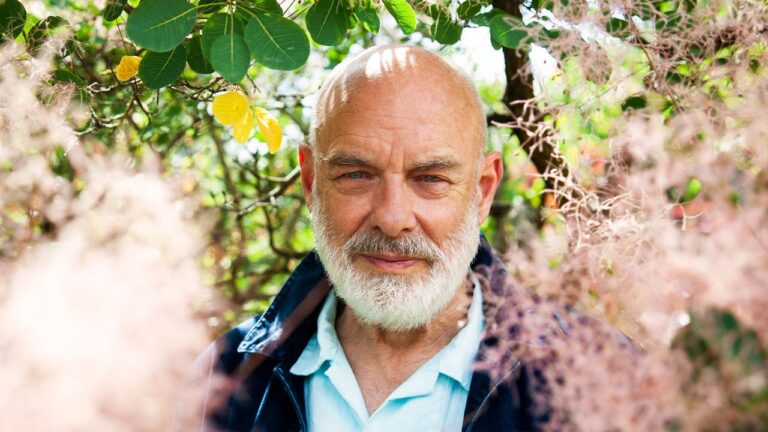 One transition I liked on the album was “Garden of Stars” to “Inclusion,” which comes as a relief. It made me think of the fire lily growing after wildfires.

That’s always a dialog, the possibility that something good might come out of it. In “We Let It In,” that line “the whole of it in gorgeous flames” is an attempt to say that the destruction is a part of the process. Nature is always changing. What we’re worried about is that we won’t be part of the picture.

Can we mix innovation and preservation?

You want some kind of play between those two. Obviously we can’t fix the world in aspic. My friend who is a farmer says, “There’s new species all the bloody time, some of them will look after themselves.”

We all thought politics wasn’t important anymore, that technology would become the politics and create the future itself. It’s related to that horrible individualism of Ayn Rand—Nietzsche for teenagers—and the idea that the power of will is the strongest power on the planet. I would like to tell her that it turns out not to be true.

If community is the alternative, do we need a shared climate culture?

What I see happening now is the biggest social movement in human history. There are billions of people involved in environmental care of some kind, but the media aren’t looking. There’s a huge amount of creative intelligence around, that’s what makes me hopeful. There’s a book I often mention by Alexei Yurchak called Everything Was Forever, Until It Was No More.

Yes. It’s about the end of the Soviet Union, how it just disappeared overnight. One day everyone was communist, the next day they weren’t. I always think of that as an illustration of how quickly things can change. I think the idea came from this book that revolutions always happen in two stages. The first stage is when everyone realizes something is wrong. So that’s where we’ve been now for a while, with the exception of a few ostrich holdouts. The second stage is when everyone realizes that everyone else realizes it as well. That’s the moment I think we’re heading towards. When the thing goes from being a liquid to a solid. Suddenly it’s a phase change. Within three years it will be impossible for a politician to run for office without climate change being the primary issue.

How do you avoid a climate change album being didactic?

Propaganda is unpleasant and relatively ineffective. What art is mostly doing is testing where we are by how we feel about things. Feelings are the beginning of thinking. The other thing the artist is saying is there are other realities possible. It’s offering you a little world with its own terms and values.