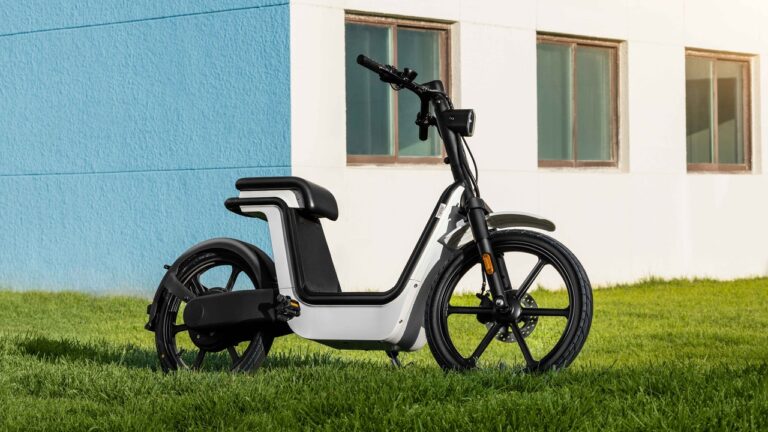 Hewn from one solid piece of aluminum alloy, the simple handlebars, lacking adornment or its competitors’ typical tentacles of wires, feel solid and, most of all, give me confidence in the driving capabilities of the moped. There is a basic, small LCD framed at the center of the handlebars that displays my battery range, trip information, and drive mode. Yet on approaching the first corner from my house, I noticed there are no indicators or wing mirrors. Without them the riding is kept as simple as possible, but feels a little worrying on a morning commute in a city of 24 million people.

Most electric mopeds like the NIU have small wheels, but the MS01 comes with large, 17-inch tubeless wheels, with disc brakes at the front and rear. Push off the kickstand, turn the handle, and you’re off—rapidly at first thanks to its 400-W motor, and then with the power quickly tapering off after about 15 kilometers per hour, up until its limited top speed of 25 kilometers per hour (an admittedly pedestrian 15 mph). I easily beat other mopeds off the line, but soon ran out of puff. This is all to conserve battery—a removable lithium affair rated at 48 V/20 Ah—which has a range of up to 65 kilometers (40 miles) and can easily last a week on a simple urban commute.

I noticed no rattles or shakes of the plastic trim, which is common on other cheaper competitors’ mopeds. Most of all, though, everyone looked at me. The clean black frame against the pure white of the body really stood out against the sea of garish, cheap plastic and lead-acid-battery-powered mopeds.

Hidden under the seat is its single shock absorber, which helps to soften the blows from the bumpy roads. Each time I accelerated smoothly past 15 kilometers per hour, though, there was an incessant beeping sound every five seconds, likely to remind me to stay at cruise speed. It did nothing more than irritate and spoiled the riding experience somewhat.

Cruising down wide side streets on the MS01 was easy and effortless. I was always one of the first to accelerate away from lights, using one of the only two buttons to blast the weedy horn (the other puts the bike into drive mode and turns the lights on). Still, the poor power came back to haunt me, as although I passed some of the stragglers with boxes piled high on their bikes, they soon caught up and overtook me on their de-restricted, lead-acid, generic mopeds.